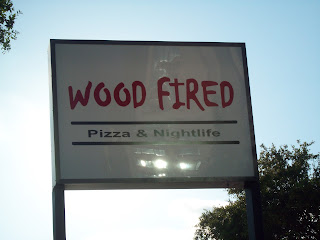 Wood Fired Pizza has been on my Foodie Bucket List for years. With one location in Tampa and a new one in St. Pete, both were at least an hour's drive. I finally found myself in St. Pete after a particularly awful afternoon of tests at a Doctor's office, and planning on dinner with my friend John, a/k/a "RibDog". When he suggested Wood Fired, I was all in. On the way there, he advised me that there was only outdoor seating. Outdoor seating? In Florida? It's not even summer yet, but this day was oppressively hot. And then I'm thinking it's in St. Pete, probably on a busy street. Cars and trucks driving by, I'll be inhaling exhaust along with garlic and herbs. But the worst thought of all was sitting amongst tables of cigarette smokers....so maybe Wood Fired wasn't the best choice after all...

We decided to give it a shot, and it ended up to be the right choice. We arrived and took a seat on the patio, which was set back far enough from the street that we were unaware of any traffic. Plenty of overhead fans kept a nice cool breeze blowing. We arrived relatively early, around 7pm, there were only about 4 other tables occupied, and no one was smoking. Incredible aromas of spicy sauce wafted through the air. Our attentive waitress came over with menus and to take the drink orders. Sadly, they were out of Stella Artois, and after the horrible day I had, I was thirsty for an ice cold beer. Seeing Genesee Cream Ale on the menu put a smile on my face, I hadn't had Genny since the 1970's when I was in college in Ohio. I know my taste in beer and wine has changed, but this Genny hit the spot, cold, creamy and delicious. 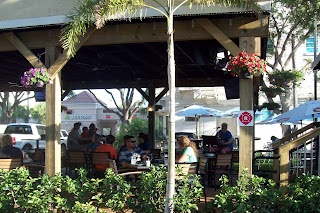 The menu is awesome. I was overwhelmed. There were so many things I wanted to try, and it was definitely hard to make a decision. We started with an order of a dozen wood oven fired Little Neck Clams, served with a spicy blend of Pecorino Romano, garlic slivers and oregano, and a Classic Caesar Salad, romaine tossed with Caesar dressing, topped with wood shaved Parmesan and croutons.

The clams were decent, tiny little bites with nice flavor, but I could have used a bit more garlic. Oddly they were served with a bowl of marinara sauce (?) and I dipped a few in before deciding they were better just dredged in the garlicky juice on the bottom of the plate. We moved the sauce over to the plate of "Wedges", crispy pieces of pizza crust that came with either the salad or the clams, and that worked much better. 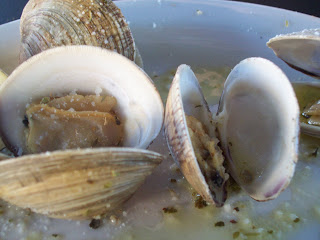 Sitting outdoors in the breeze, sipping that cold beer and enjoying good company, good food, and some pretty cool people watching, listening to the incredible music (Pink Floyd, Led Zep, Allman Brothers), I settled in and was happy as could be. Kitchen staff was outside in the garden, picking fresh basil, and we could smell the basil all the way across the yard. 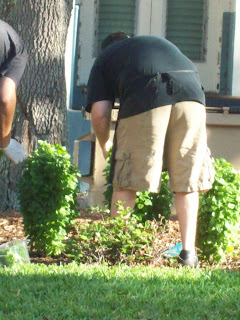 Then our pizzas came and I was elevated to an entire different level. Let me mention here that I am a New York girl, having moved to Florida six years ago. The first couple of months, we tried quite a few local pizza places, eat-in, take out and delivery. Every single pizza ended up in the trash or just left on the table after only 1 or 2 bites. I had just about given up on finding decent pizza. So here come our pizzas....RibDog ordered the Carnivore, (obviously covered with meat), and I opted for the Pistachio Pie. Pistachios on a pizza? Yeah I know it sounds crazy. But all my foodie friends raved about it, so I dove in. This gorgeous pizza had ground pistachios, fresh mozzarella, raw red onion, ricotta, carmelized onions, garlic, herbs, olive oil and Pecorino Romano. 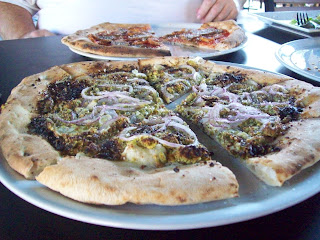 Pizzas "at home" (yes, to me, NY is still "home") are eaten by picking up a slice (which will remain rigid, sticking straight out) and folding it in half; you then give it a little shake and watch the droplets of orange colored oil splotch down onto your white paper plate. This pizza could be held sticking out straight but the last inch or so had to be propped up with another fingertip. Not quite as crispy as a NY crust, but damned good just the same. The crust was firm and crunchy and had a fabulous flavor. The texture was incredible, a combo of the ground pistachios and the abundance of garlic gave it a nice bite. The layering of flavors was dreamy, with the crisp red onion and the sweetness of the carmelized onion playing off each other. That pie was just incredible. I can't wait to go back, next time I'm trying the Dante's Inferno (Sriracha infused San Marzano sauce with meatballs, grated Dante & organic herbs).

Very cool vibe, great beer list, good service, great food. What's not to like? Yeah, it was a tad expensive. Pizzas come in two sizes, and we got the smaller ones, which were $16.00 each. For the 2 pizzas, salad, clams, 2 beers and 2 cokes, our bill came to around $80 including tip. And worth every penny.

Ilene
First and foremost, a foodie.